Here you go......... you can watch The Virgin Suicides at the links below!

Sorry its in two parts!

I found August for free in the net.
Here are the 3 parts:

I was really shock about the death of michael jackson! I like him because some of his songs were really uplifting such as Heal the World,,and so on...

Then It came into my mind about Josh Hartnett,,remember when he was this stomach problem,,I was really like crying! so I felt for the friends, warriors and families of Michael Jackson it really hurts when someone you love passed away or got ill...
So, in be half of our joshhartnett community, our condolences to the family of… Continue

I made a screen saver...

I've posted 40 Days and 40 Nights and Lucky Number Slevin in the Video Section of this Site for you to enjoy!

Radiohead - Climbing Up The Walls
http://www.youtube.com/watch?v=EgDPkqiXrjc

Is Josh still in Japan? He's been gone for a month and a half all together now.

His restraunt (sp?) back home.

Does anyone know the name of it?


So what's the deal on I Come With the Rain? The Josh Hartnett action thrilla with a good international cast, solid backing by the likes of StudioCanal, and maybe even a score by Radiohead should be one of those movies we're talking more about. But either distributors in the U.S. aren't interested or the production companies are seeing how it fares overseas, where it probably has a better shot at… Continue

hello guys what do we have for josh on his birthday?

BUNRAKU pushed back to 2010 release!

Quote........"Some slightly disappointing news here, but nothing that we Dears can’t deal with. On TV Asahi’s website under the Music Statio section, it was announced that BUNRAKU will be released sometime in 2010. Although we were all hopeful for a summer 2009 release, you have to take into account that the movie is going to be a bit like Sin City, therefore it will have a lot of comupter graphics in it. So it’s going to take a little… Continue 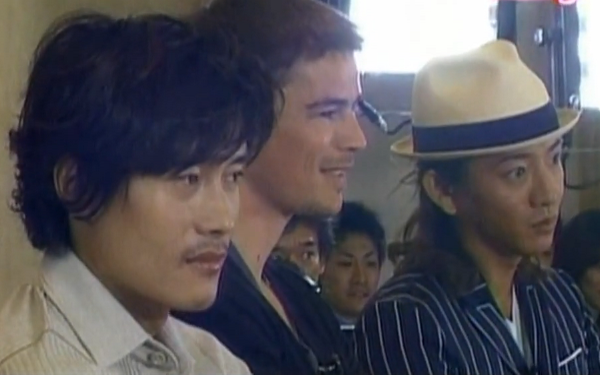 Kimura-san had asked Byunghun-ssi how does he memorize his scripts? BH’s reply was that he never memorizes the lines by heart as he will instead analyze the character he’s playing and the background of the plot which will automatically help him better to convey his acting.
They also said BH was very serious in thinking for a good… Continue

Josh is in town for the launch of the Armani Diamonds for Men campaign, the new fragrance which he is currently promoting. I’m conceded exactly 14 minutes to interview him…

In the advertising campaign’s photographs and video, you are surrounded by the paparazzi and screaming fans…
A situation which I try to avoid at all costs…

And, despite this, you are still considered a sex… Continue

I posted this video for josh,,Its now available in youtube please see the movie you will surely like it,,thanks friend lets always support josh...
thanks Gos Bless us all..