“From the streets of Hong Kong to a post-apocalyptic, vampire-plagued United States, from a town run by Kung Fu killers to the oil fields of Alberta, this year’s Midnight Madness selection will take audiences into worlds that are sure to excite, shock and thrill,” said Colin Geddes, TIFF programmer. 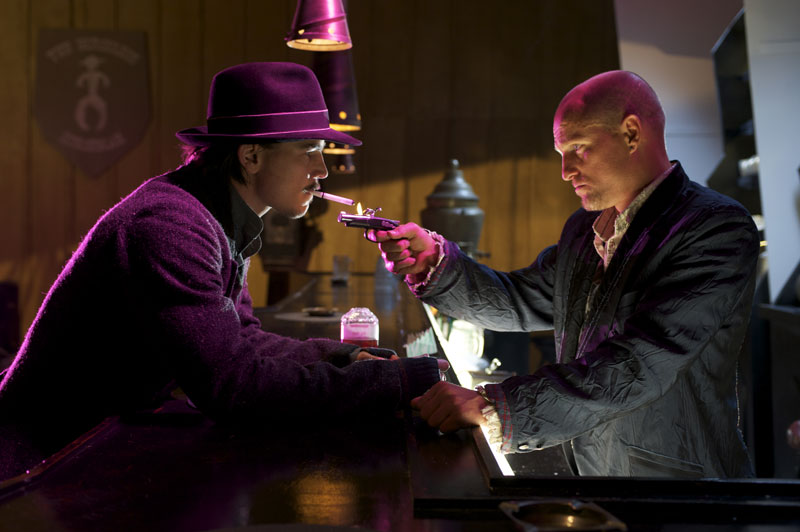 BUNRAKU,Guy Moshe, USA
In a world with no guns, a mysterious drifter (Josh Hartnett), a young samurai and a bartender (Woody Harrelson) plot revenge against a ruthless leader (Ron Perlman) and his army of thugs, headed by nine diverse and deadly assassins. This visually stunning film is filled with uniquely choreographed action sequences of a new style that melds east with west and old school with new. The film also stars Demi Moore.
View TIFF presentation for BUNRAKU

The Butcher, The Chef and the Swordsman Wuershan, Hong Kong, China/USAWorld Premiere
A group of misfits become mixed up in the struggle to own a deadly kitchen cleaver made from the top five swords of the martial arts world in this wild and brash action comedy that is sure to have audiences running to Chinatown after the film for a late night snack.

Fire of Conscience Dante Lam, Hong Kong, China North American Premiere
Dante Lam proves himself to be a talent to look out for in this slam bang action film where robbers and gunrunners battle with cops on the busy urban streets of Hong Kong. Starring Leon Lai, Fire of Conscience is easily one of loudest action films from Hong Kong in recent memory, with an orchestra of exploding grenades and machine gun rounds.

Insidious James Wan, USA World Premiere
When proud parents take possession of an old house, an accident results in one of their sons falling into a coma. The tragedy doesn't stop there when they are beset by vengeful spirits from another realm in this new chiller by the director and writer of Saw and by the producers of Paranormal Activity. The film stars Rose Byrne, Barbara Hershey and Patrick Wilson.

Red Nights Julien Carbon, Laurent Courtiaud, Hong Kong, China/FranceWorld Premiere
This shocking debut by director duo Carbon and Courtiaud is a seductive cat-and-mouse thriller set in Hong Kong, about a woman's obsessive desire to own a rare object that hides a deadly and perverse secret.

Stake Land Jim Mickle, USAWorld Premiere
In the aftermath of a vampire epidemic, a teen is taken in by a grizzled vampire hunter on a road trip through a post-apocalyptic America, battling both the bloodsuckers and a fundamentalist militia that interprets the plague as the Lord’s work.

SUPER James Gunn, USA World Premiere
After his wife (Liv Tyler) leaves him for a drug dealer (Kevin Bacon), a frustrated husband (Rainn Wilson) decides he will win her back as Crimson Bolt, a costumed vigilante armed with a monkey wrench. His actions bring him an admirer, an overeager comic store clerk (Ellen Page) who wants to be his sidekick.

Vanishing on 7th Street Brad Anderson, USA World Premiere
When a massive power blackout causes the population to inexplicably vanish, a small handful of survivors (Hayden Christensen, Thandie Newton, John Leguizamo) band together inside a desolate tavern, struggling to survive as the darkness hones in on them. From director Brad Anderson (The Machinist, Transsiberian) comes an apocalyptic thriller with a terrifying vision of our world's end and a story that wrestles with the nature of existence itself.

The Ward John Carpenter, USA World Premiere
Acclaimed director John Carpenter (Halloween, The Thing) makes his long-awaited return to the screen with a thriller about a young woman (Amber Heard) in a 1960s mental institution who becomes terrorized by malevolent unseen forces.

The previously announced Canadian short film The Legend of Beaver Dam (Jerome Sable) will premiere prior to Fubar II.

The Midnight Madness Package is $157, and available to students and seniors for $100 (prices exclude taxes and fees). Other ticket packages for the Festival are also available for purchase by cash, debit or Visa†. Purchase online at tiff.net/thefestival, by phone at 416-968-FILM or 1-877-968-FILM (Monday through Friday, 10 a.m. to 7 p.m.,) or in person at the TIFF Box Office at 2 Carlton Street, West Mezzanine (Monday to Friday: 10 a.m. - 7 p.m. The 35th Toronto International Film Festival runs September 9 to 19, 2010.

Midnight Madness is made possible through the generous sponsorship of Cineplex Entertainment LP and SPACE.

Comment by Camino on August 23, 2010 at 8:29pm
A chance to win free tickets to the world premiere of Bunraku...
http://www.youtube.com/watch?v=_2cigtd8QDY

Comment by Olivier on August 19, 2010 at 3:32am
keithcalder via Twitter: Fun to see other TIFF programmers chime in on how much they like BUNRAKU. "Gorgeous, fun, super cool" from @jane_tiff (6:08 PM Aug 17th via YoruFukurou)
Colin Geddes (TIFF Midnight Madness programmer) via Twitter: say hello to @EmilyKaiho who will rip your hearts out with a samurai sword in BUNRAKU! Looking forward to meeting you! #TIFF10 (8:25 AM Aug 18th via Seesmic twhirl)

Comment by Camino on August 17, 2010 at 3:56pm
Check out the new images from Bunraku
http://www.torontointernationalfilmfestival.ca/filmsandschedules/ti...

Comment by Olivier on August 17, 2010 at 1:35pm
Full description for BUNRAKU (by Colin Geddes, TIFF)
In a hyperreal, hyper-saturated, hyper-driven dystopia, guns are banned upon pain of death and the sword is now king.
Nicola the Woodcutter is the most powerful man east of the Atlantic, a shadowy crime boss who rules with an iron fist with the help of nine diverse assassins and the Red Gang, a force not to be trifled with. His right-hand man is Killer #2 (Kevin McKidd), a cold-hearted, smooth-talking, toe-tapping murderer dressed in red and wielding a deadly blade without remorse. The citizens live in fear of this pack of wolves, and wait for the hero who can overthrow the tyrant.
One night, a man (Josh Hartnett) walks into the bar of the local insurgent and desires two things: a shot of whisky and to kill Nicola. Soon, another stranger enters the bar, a samurai named Yoshi. Yoshi wants to avenge his father by taking back a talisman that Nicola stole from his clan. Armed with crossed destinies and incredible fighting skills, the two set out on a journey, breaking bones and cracking heads in search for Nicola.
In an amalgam of samurai film, spaghetti western and chop socky – and using a stylish blend of neo-noir, German expressionism and Russian futurism – director Guy Moshe’s debut feature Bunraku is nothing short of ambitious. Characters in the world of Bunraku spin and ricochet against a backdrop that resembles a pop-up-book made of origami, ever-changing and whirring like a steam driven Victorian theatre set. It is a universe driven by pugilistic force, delivered in a brash style of amazing physical combat sequences by stunt coordinator Clayton Barber and fight choreographer Larnell Stovall that evoke Gene Kelly by way of Bloodsport. Josh Hartnett will surprise many with his presence as the man with no name, played with a steely perfection and ripped straight out of a Western, while Gackt channels Toshiro Mifune's stone cold devotion to a mission.
Completely unique while drawing upon a myriad of classical influences, Bunraku emerges as a visually stunning and adrenaline pumping blend of flavours old and new, east and west.