Day three, and the fatigue is already setting in. Lunch was nonexistent, and dinner was some of the best hors d’oeuvres I’ve had in a long time, at the BUNRAKU party. One of the major fringe benefits of being engaged to the Midnight Madness programmer is that he’s the sort of classy gent who talks me up to his guests, makes me sound charming and delightful, and gets me invited to fancy receptions. I try to repay him by being a really excellent party guest.

I wanted to squeeze another screening into my evening, but instead had time only to change clothes before zipping off to the BUNRAKU party, which, while totally low-key, gets my nod for best social event attended thus far, due entirely to the unbelievable friendliness of everyone who was there, from Josh Hartnett (gracious, nice, and unrecognizably normal looking, by the way), to director Guy Moshe, to the film’s super cool fight coordinator Larnell Stovall and stunt coordinator Clayton Barber. Larnell incidentally worked on my favourite action film of 2010, Undisputed III. Seriously, check out a) the film, and b) the You Tube video of star Scott Adkins training for the role. Mind blowing. 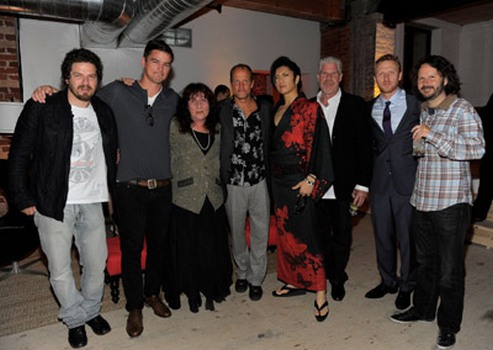 The food and drinks at the BUNRAKU party also gets a thumbs up for being so interesting. My favourite cocktail was called the Torontonian, and consisted of vodka, freshly squeezed cucumber juice, and ginger beer. Refreshing to the max.

Of course, you can’t attend a film’s reception and then not attend the film, so even though I was pretty tired, I hit the midnight screening of Bunraku. It wasn’t exactly a big chore to attend. I’d been really looking forward to the film. Shane McNeil has already reviewed it here, but my two cents is: really fun film chock full of killer fight scenes and incredible production design. Could have been a bit shorter, but then again, I could have been a little less tired as well, right?