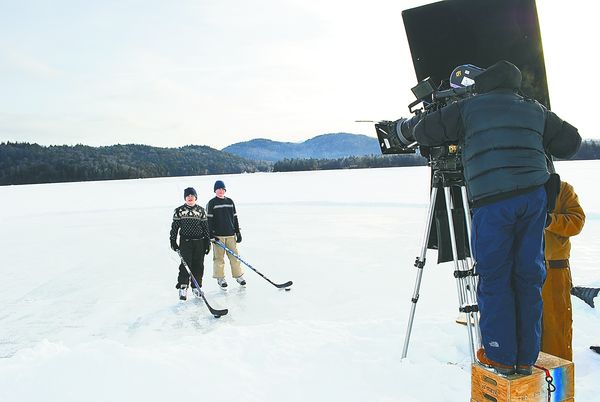 Although details were just released, a new film, based on a novel inspired by a true local event, started shooting a scene on the thick ice of Lake Placid this winter.

“The timing worked out so we could do a winter shoot,” said one of the producers, Ed Graham. “It was pretty chilly out there, but everything went well.” The film, called “Dancehall,” will star Stephen Lang, who just starred in the blockbuster movie “Avatar,” as well as Oscar winner Ellen Burstyn and possibly Josh Hartnett, who is known for roles in “Black Hawk Down,” “Pearl Harbor” and “Sin City,” according to Graham. "The casting process has been very interesting so far,” Graham said. “Having these big stars show interest has changed things in a heartbeat. If Josh Hartnett doesn’t sign on, I’m sure someone else of the same stature will be interested.”

Although they aren’t big-name celebrities, the film’s writter and director, Tennyson Bardwell, already cast two local kids, Sean Moore and Ryan Kane, in the scene that was filmed this winter. “The kids were really excited when it happened,” said Sean’s father Bill Moore, who is also the assistant chief of the Lake Placid Village Police Department. “They thought it was pretty cool they might end up on the big screen.” The scene that was shot was meant to show the passing of time, according to Graham. Moore said he got in touch with Bardwell through his wife’s business and said the director was looking for two kids that could skate and play hockey. Moore also said it was likely they will be asked to return in the summer to shoot again when the lake thaws.

Bardwell got some attention last year for his second film, “The Skeptic,” which was shot in the greater Albany area and starred Tim Daly and Tom Arnold. Graham said he is currently working on securing funds to support the film. If all goes well they will start shooting more scenes in Lake Placid in early June. Locations for “Dancehall” will include a private home on Moose Island, scenes on the lake and underwater, and key scenes shot in the historic Essex County Courthouse in Elizabethtown.

The film is adapted from a 1982 novel of the same name written by Bernard F. Conners, of Loudonville, who is also a part-time resident of Lake Placid and has served on the state Olympic Regional Development Authority Board of Directors. The novel was inspired by true events. “I first heard the legend when I was canoeing on Lake Placid in 1980 with a group from Camp Woodsmoke,” Graham said. “Then I found Mr. Conners’ novel and just fell in love with the story.”

In 1963, a woman’s body was discovered by a group of local divers, right off rocky cliffs of Pulpit Rock, not far from the Lake Placid Marina. Eventually it was identified as Mabel Douglass, founder and the first dean of New Jersey College for Women, who had disappeared 30 years earlier. According to “A Lady in the Lake: the True Account of Death and Discovery in Lake Placid,” written by George Christian Ortloff and published by With Pipe and Book, the body was incredibly well preserved as it sat in the cold and still waters of Lake Placid, but began to disintegrate as it was brought to the surface. The woman’s drowning was eventually determined to be accidental but left several questions unanswered, perhaps the most intriguing being: Could she have possibly been murdered?

According to Graham, the novel, based on these events, was first optioned by Francis Ford Coppola in the 1980s, but after about a decade the rights reverted back to the author. Graham reached out to Conners in the early ‘90s and was able to secure the rights to make a film. “The story kind of fell off everyone’s radar screen but mine,” Graham said. “I had been thinking about it all those years.”

The film will be set in 1962, when a young woman disappears, and 1982, when her body resurfaces, according to Graham. If Josh Hartnett signs on, he will play the film’s center role as the character David Powell; Lang will play an investigator looking into the case - based on real-life investigator Mark B. Cross — and Burstyn will play Powell’s mother-in-law.

“There are so many captivating elements to this story,” Graham said. “It’s a rags-to-riches story, with the twists and turns of a whodunit mystery. All of the characters are incredibly relatable.” Although Conners is not involved with the process of making the film, Graham said he has been helpful yet respectful, saying: “It’s your project, and I’m available if you need me.”

Graham said the film is very true to the novel and will highlight the beauty of the area. He also said the project could have positive economic benefits to the region. “This type of thing can help various tourism councils to draw in a lot of visitors and bring a lot of attention to Lake Placid. CEO of the Regional Office of Sustainable Tourism Jim McKenna said that being recognized from a feature film can have a big impact on the draw of a region worldwide. “The power of movie’s is incredible,” McKenna said. “We’re known, literally all over the world from that movie Lake Placid, and that wasn’t even filmed here.”

The 1999 monster movie, which threw in elements of humor and horror in what Wikipedia calls the “buddy genre,” had nothing to do with the Village of Lake Placid. Graham said that Lake Placid’s already-established international draw, along with an economic incentive from the state, were key factors in deciding to shoot the entire film in upstate New York. He said if all goes according to plan, a crew of about 60 to 80 people will be in the village of Lake Placid for about six to eight weeks, staying in local motels or renting houses in the area. Although more details will be provided when things move forward, casting and production crews will be looking for local extras, according to Graham. “If we can secure the funds, I think we have a great story to tell,” Graham said. “This is a real movie. I have to keep telling people that there are no alligators in this film. We want the community to be involved in this project, wherever possible.”

Comment by Olivier on September 2, 2010 at 3:29am
‘Dancehall’ movie stalled - production will be pushed back to begin in the spring of 2011: http://www.adirondackdailyenterprise.com/page/content.detail/id/515...

Comment by Camino on August 22, 2010 at 12:13pm
The film began shooting a few scenes this past winter in Lake Placid, and was set to continue this summer, but after casting issues, including an inability to sign Josh Hartnett, the film was delayed. Currently on board are Stephen Lang of the highest grossing movie of all time Avatar, Ellen Burstyn whose best known for her roles in the films The Exorcist, The King of Marvin Gardens, Alice Doesn’t Live Here Anymore and Requiem for a Dream, and Chris Riggi of television’s “Gossip Girl.”
http://thefreegeorge.com/thefreegeorge/murder-and-foul-play-take-th...

Comment by Olivier on August 20, 2010 at 9:25pm
According to My Entertainment World, Dancehall will start filming on August 30, 2010.
"DANCE HALL - August 30, 2010 - Lake Placid, NY; Details Are only Available By Subscription.. STORY: The film is about a young woman's surfaces in Lake Placid, opening up a twenty years old murder case that digs into the darker side of some very rich residents in 1982. (Posted: August 16, 2010)"

Comment by Olivier on August 16, 2010 at 1:46am
LAKE PLACID - The crew making the film "Dancehall," which will be shot this fall in Lake Placid, Lake George and Albany, is looking for musicians and other extras to be in the movie.
Extras Casting Director Elizabeth Shea said she needs a band that can play 1960s-style music, and if she can't find a full band, she plans to form one out of individual musicians.
Shea also said she specifically needs people who can dance, but is looking for people from Lake Placid and the surrounding area of all types to be extras in the film.
"Dancehall," adapted from the 1982 novel of the same name, is about the disappearance of a young woman and the discovery of her body a number of years later near Lake Placid.
The final casting call for musicians will be from 11 a.m. to 7 p.m. Tuesday, Aug. 10 at 48 Barn Road in Lake Placid. Another general casting call will be held Monday, Aug. 16 at the same time and place.
For more information, send an e-mail to sheacasting@gmail.com.
source: Adirondack Daily Enterprise

Comment by Camino on July 30, 2010 at 6:37pm
Thanks for the info Olivier. Hopefully we will get some news soon, whether or not Josh will be in this?

Comment by Olivier on July 29, 2010 at 6:15pm
via Twitter: "Love it! Casting call 11am-7pm: Today, July 29th, Wed. Aug. 4th, Tues. Aug. 10th, Mon. Aug. 16th for Dancehall movie!"
source: http://twitter.com/Northwoods_Inn
via Twitter: "Just got offered an internship at the josh hartnett film being shot here. I have NEVER been so happy in my life."
source: http://twitter.com/caseypowers