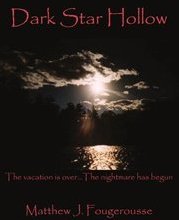 Dark Star Hollow to Tap into Your Nightmares in 2012: Early Production Details

Dreamgrifter Productions and Torchlight Entertainment will be teaming up to bring a film adaptation of Matthew J. Fougerousse's novel Dark Star Hollow to the big screens. Fougerousse's book deals with the devil and capturing souls, with the material ripe to create nightmares. As well, this picture will have an excellent cast including: Ron Pearlman, Josh Hartnett, Billy Zane, Kane Hodder, Elisha Cuthbert and many more. Here is your doorway into the abyss, as Dark Star Hollow gets set to move into production in 2012.

Tagline: "The vacation is over...the nightmare has begun."

The synopsis for Dark Star Hollow:

"In 1960, David Sinclair makes a deal with the devil for the life of his wife. He floods Bright Star Hollow, but doesn't claim all the souls. Forty years later, he is given a second chance" (Dreamgrifter).