Hartnett says would like to act with Lee Young-ae 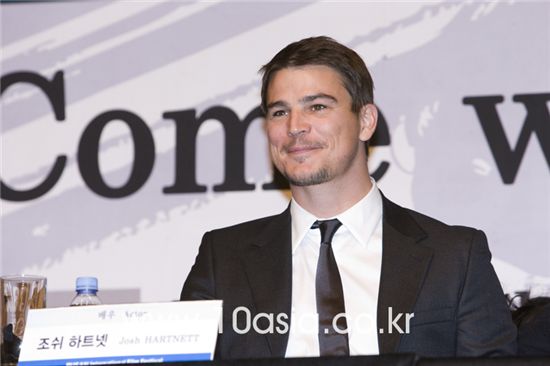 Hollywood heartthrob Josh Hartnett said he would like to try working with Lee Young-ae if given the chance to act with a South Korean actress.

The 31-year-old heartthrob made the remark during a press conference on Friday for his thriller invited to show at the Gala Presentation category of the 14th Pusan International Film Festival (PIFF).

He starred in the thriller helmed by Vietnamese-French filmmaker Tran Anh Hung, 1995 Venice Film Festival winner for "Cyclo", set for release on October 15.

Below are responses from the press conference by the "Pearl Harbor" star.


Q: We understand that this is your first time to Korea. How does it feel attending the PIFF?
Josh Hartnett: First of all, I'm thankful to the organizers who invited me here. I know that this is the 14th year and I'm happy to be here. This is my first time to Pusan and I came because Lee Byung-hun invited me. So I want to thank him again also. I am thankful that so many of you welcomed me so warmly. I hope more actors will be able to join in next year.

Q: What was the first encounter between you three like?
Hartnett: I met Takuya Kimura for the first time on location in the Philippines and I didn't recognize him because he had been shooting for the past 14 hours covered in in mud. I almost mistook him as a strange person. (laugh) But I was impressed by his professionalism. My first meeting with Lee Byung-hun was on set too. He came on set at night with his manager in his gym clothes and sneakers and I saw his muscles and thought 'Did he just come back from working or is he on his way?' I was a bit intimidated too. (laugh)

Q: There are many beautiful actresses in Korea. Is there anyone you would want to act with by any chance?
Hartnett: I actually don't know that many Korean movies but I watched "Sympathy for Lady Vengeance" a few years ago. The film left a very strong impression on me and actress Lee Young-ae's acting was great. I would want to try working with her.

Q: Is there any Korean food you like in particular?
Hartnett: Lee Byung-hun took me to a Korean-style sushi restaurant last night. He thought I was clueless and keeps saying I like the cheaper sashimi. He's wrong. I was just being polite. It seemed Lee's chopsticks were going to the more expensive sashimi so I ate other ones on purpose. (laugh) I live in New York so I usually eat a lot of Korean food. Korean-style barbeque too.

Q: Did you by any chance last night, try eating live octopus like they do in the movie "Old Boy"?
Hartnett: I couldn't last night but I think they have it prepared behind stage. I'll try it after the press conference (laugh). 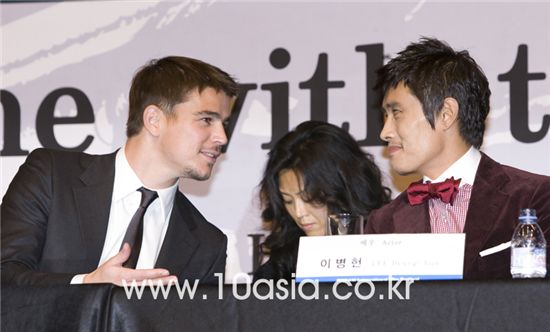 Q: What was the first meeting between you three like?

From left, actors Josh Harnett and Lee Byung-hun.
Lee: Josh Hartnett said I looked like an athlete when he first saw me but there's a reason I appeared like that. At the time I was going back and forth between Hong Kong and China to shoot "The Good, the Bad, the Weird" and "Rain". I had to go on a long flight from China from shooting "Good" ahead of my first meeting with Josh Hartnett so I had to be in comfortable clothes. So I was in those clothes because I went right to the set after arriving there. (laugh) Josh Hartnett was very friendly to me on our first encounter so I thought 'Why is he being so friendly?' but it turned out he had been watching my film "A Bittersweet Life". So I think he was happy to see someone he had just been watching on screen in real life. (laugh) I met Takuya Kimura while making a cameo appearance on "Hero". I thought he would be a very funny person before I got to meet him. But in person, he turned out to be charismatic. He seemed different from how I had seen him on TV. He has dual sides of attractiveness to him.