DESCRIPTION : Acclaimed French-Vietnamese director Ahn HunG Tran (The Scent of Green Papaya) brings together top stars from America and Asia for his first English-language film, the 2009 neo-noir thriller I Come with the Rain. A stark departure from Ahn's previous works, I Come with the Rain stars Josh Hartnett as a troubled private eye on a mysterious job that takes him from Los Angeles to Asia. But what starts as a manhunt turns into a lurid journey of revenge and redemption. Three of Asian Cinema's biggest names - Japanese megastar Kimura Takuya (Love and Honor), Korean heartthrob Lee Byung Hun (G.I. Joe: The Rise of Cobra), and Hong Kong actor Shawn Yue (Shamo) - co-star in this visually and emotionally enthralling thriller that matches its stylistic moodiness with harrowing violence, suspense action, and intense performances from the all-star cast. Two years after killing a serial killer in the line of duty, Kline (Josh Hartnett) now works as a private detective, but he is still haunted by the ghosts of his past. A powerful corporate honcho hires Kline to find his son Shitao (Kimura Takuya) who has mysteriously disappeared in the Philippines. Kline follows the trail to the jungles of Mindana, and then to the urban jungle of Hong Kong, where he enlists the help of an old police officer friend (Shawn Yue). The search leads Kline to cross paths and gunfire with mafia boss Su Dongpo (Lee Byung Hun), who is also hunting for Shitao..

BOTTOM LINE [author : Gary W. Tooze] : What to think of all this. Tran is one of my favorite directors - and the only one I had bothered to write a complete article back in 2003. However, I concur with most critiques of I Come With The Rain as a beautiful but confusing effort. The director's obvious brilliance lies somewhere deeply beneath the surface of the, less comprehensible, narrative. It likens itself much more to the harsher reality of Cyclo than the auteur's more gracefully gentle films The Scent of Green Papaya or Vertical Ray of the Sun. Performances are strong and the Blu-ray does a solid job on the A/V front. I like Harnett and the story concept but not the direction it goes. I'd greatly have appreciated a commentary to explain some of the film's eccentricities but, sadly, I suspect this edition will be 'it' for 1080P. It is very expensive but for those keen on the director - this is the best way to see this head-scratcher outside the theater. I need to see I Come With The Rain at least once more but because of the exorbitant asking price for the Japanese Blu-ray edition - we'd have to say - 'pass' for now. 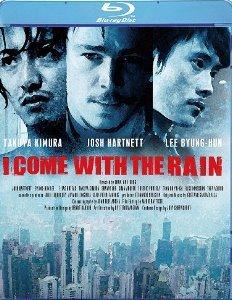 Disc
Region: FREE! (as verified by the Momitsu region FREE Blu-ray player)
Runtime: 1:54:25.859
Disc Size: 40,746,166,296 bytes
Feature Size: 35,498,010,624 bytes
Video Bitrate: 33.90 Mbps
Chapters: 12
Case: Standard Blu-ray case
Video
Aspect ratio: 1.78:1
Resolution: 1080p / 23.976 fps
Video codec: MPEG-4 AVC Video
Audio
Dolby TrueHD Audio English 3200 kbps 5.1 / 48 kHz / 3200 kbps / 24-bit (AC3 Embedded: 5.1 / 48 kHz / 640 kbps)
Dolby Digital Audio Japanese 640 kbps 5.1 / 48 kHz / 640 kbps
Image
There are some heavy style changes and even alternate use of film stocks that take place throughout Anh Hung Tran's bizarre I Come With the Rain. This Blu-ray seems to export these visual deviations quite effectively in a faithful dual-layered AVC-encoded transfer from Avex Trax. It reports a strong bitrate and grain levels fluctuate dependant on the intent (past to present), detail is most notable in close-ups but colors seem consistently vibrant. The image quality shows some nice textures and interesting cinematography. The Blu-ray brings these attributes to the transfer cleanly and without manipulation. This disc probably gives a very good representation of the theatrical appearance.
Subtitles
Japanese, none
Extras
Not much in the way of supplements with a short Making Of... in English with forced Japanese subtitles. It has a lot of behind the scenes footage and input by Josh Harnett. There is also a Japanese Interview with 3 casts members (only Hartnett speaking English) and a Trailer and Teaser (both in Japanese). No commentary, nothing on director Tran Anh Hung.