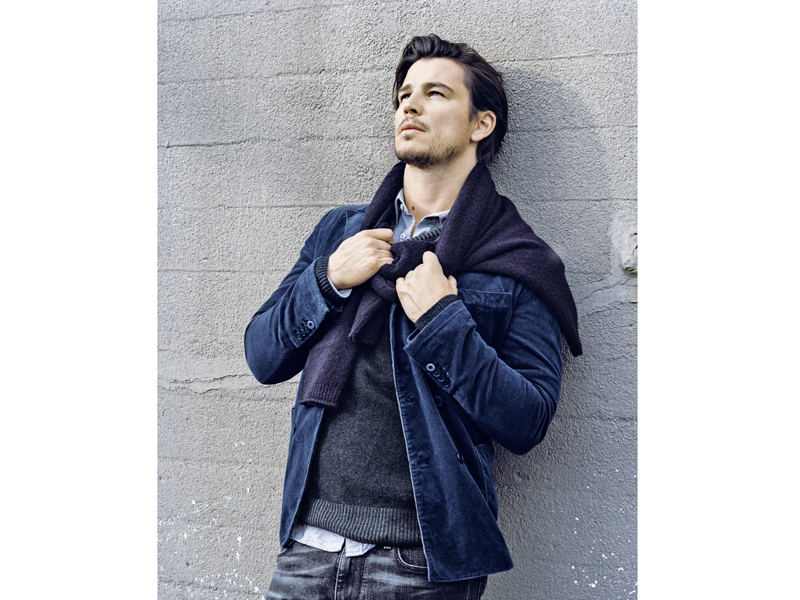 He could have had it all and just wanted one thing: to go home. 2002 Josh Hartnett Hollywood turned its back. A decision which does not regret the now 37-year-old. For the new campaign from Marc O'Polo Hartnett occurs again in the spotlight. In this interview he tells us why we had to wait for so long.

FACES: How does a boy from Minnesota to Hollywood?

Josh Hartnett: During high school, I beat my aunt in front of a casting. A youth theater with us led to Tom Sawyer. I was 15 or 16 and went with a certain Arrogance of the casting zoom, along the lines of: ". If I'm not Huckleberry Finn, I can save me" In fact, they offered me the role. After that I had tasted blood.

Q: How did it go from there?

JH: I played during my high school years, first theater. It was a creative outlet, and I had great fun. I enrolled in New York to study and received a call from a manager who had seen me in Minneapolis. She offered me to audition in Los Angeles for a pilot, and had already prepared an agent for me. This agent also supervised the Phoenix family or other young actors such as Kirsten Dunst.

Q: Then you've celebrated many successes. Why are you acting then hung up?

JH: It was an exciting time. The filming Black Hawk Down in Morocco had just finished.We shot in Sidi Moussa, a town on the border with Rabat. I work with Ridley Scott, a real movie genius, I also as a friend appreciate. Some things that I then saw but locally, changed my priorities in life.

JH: I could not really identify with the objectives set out by the Holly-wood-business goals that I had then pursued: greater say on my film projects and more success. You are to me to be important, but they lost time in relevance. Never before in my life had I experienced poverty so close. I was at an age where so not simply what bounces from you, and I said to myself: "I do not know what I can do about it, but it breaks my heart. I need to figure out how I can make my life different. "The best place for it was my home.

Q: And that was Minnesota.

JH: Exactly. Here I know the people and I can just be myself. Minnesota has always been my refuge. I want to surround myself with people at home who see not only my job, but also the people behind them.

Q: After your return you've decided, you get involved in charity projects.

JH: At the time, all these world savior clichés buzzed through my head: Think globally, act regionally. Stuff like that. One of the projects was dedicated to abused children. By others we helped homeless people. We supported financially disadvantaged young people, to enable them to study art.

Q: Have you also visited the youth?

JH: Yes, I went to a public school, as I know from personal experience that you sometimes just is serving his hours, without having learned something essential. You will dismiss into life and do not know what really matters. If I do not weiterwusste, I had the art that gave me support. I thought to myself that it would be useful to share my experiences with the people there.

Q: Which of your projects is you hold most dear? JH: I also supported a number of projects that are more focused on global problems: about environmental issues or education policy in Africa. Today I am committed to a foundation in Minnesota, The Saint Paul Foundation. It is part of a larger organization, which greatly makes up for important but relatively small concern. The staff there are wholeheartedly in the cause, and always have an eye on interesting projects, where often even small donations can make a big difference.

JH: For Lucky Number Slevin wrote one of my friends this really curious writer. We had with Morgan Freeman and Ben Kingsley a strong cast for the film. Here I was, trying to do things in my own way. But the resonance remained below expectations.

Q: What are you thinking, was it?

JH: I was thinking of this ideal, zuverschmelzen a fulfilling private life with my professional ambitions. What I had not yet really figured in his early twenties, but was that you really need to be one hundred percent with the thing, if you want your vision to fruition. I now know how the wind blows. You just have to be consistent to converting an idea into success. Making a film is like a never-ending process. If you zurücklehnst you and think that the work is done, you're doing before you only own what.

Q: To what extent have these experiences influenced you?

JH: I wasting my time no longer in projects in which it is foreseeable that they will find no audience. The fear of making mistakes is not so present. I have become more courageous and let things simply run times. When I was younger, it was to find my place in life. I had a clear idea of ​​who I wanted to be. Now I can be who I am.