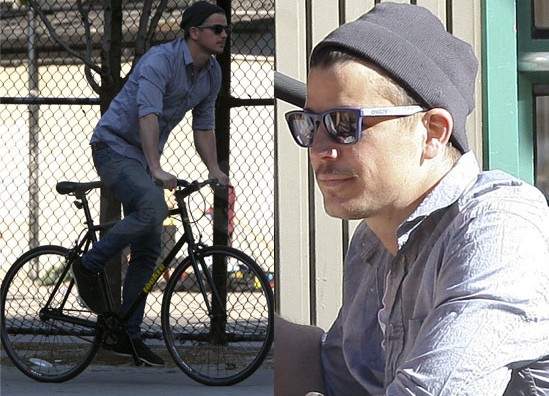 Josh Hartnett was spotted out in New York City yesterday, taking a bike ride after meeting some friends for a bite to eat. He looked gorgeous as always in beanie and shades — yum! It's been a while since we've seen
Josh on the big screen but he has two projects set to come out over the
next year or so. The first is Bunraku in which ""); return true;' target="_blank"'>he stars as a drifter seeking
revenge — the project also costars Demi Moore and Woody Harrelson. He
also has another movie Gunslinger in progress, which is set in
the future and due out in 2011. I look forward to seeing him on the big
screen again — do you?

Comment by Camino on May 1, 2010 at 9:19am
Josh Hartnett rode his bike along the sidewalk yesterday as he headed off to meet two lady friends for lunch at Da Silvano. He gave one of the girls a kiss before they all parted ways, possibly putting to rest the recent rumors linking him to Abbie Cornish. He also skipped out of the past week's Tribeca Film Festival, where Abbie served as a juror and attended plenty of events solo. Their romance might not have been meant to be, but Josh has enough love to share with his adorable canine companion.
http://www.popsugar.com/Pictures-Jos...Models-8283386