Josh Hartnett is "Joseph of Arimathea"

What I like about Josh is not his "pretty face" but the way he has selected his roles during his acting career. I like the fact he has started focusing on roles worth playing, which are intense, far-fetched and require his full commitment. As a Literature professor, I like analysing stories, roles, moods,... That's why, my friends, I'd like to contribute to this page not as a fan but as a true admirer, and perhaps provide a special view on Josh's work.

The other day I got round to watching I come with the rain for the first time. No need to mention the many references to the Bible the film contains, since it shows a "Jesus" of these times. In case you haven't noticed, I'll point out a few:

And then, Kline (Josh), who looks for Shitao and removes him from the cross with the sole intention of taking him to his father. In the Bible that part is played by Joseph of Arimathea. He is the one who takes Jesus' body off the cross after the Crucifixion and prepares His burial to help Him get to His Father in Heaven. Take a look at these fragments of an article by the BBC on The Passion:

The story of Joseph of Arimathea

The story of Joseph of Arimathea is told in all four gospels.

Joseph was a wealthy man who came from Arimathea in Judea.

He was a good and righteous man who managed to be both a member of the Council (the Sanhedrin) and a secret supporter of Jesus - which is why he did not join in the Council's actions against Jesus.

After the death of Jesus, Joseph asked Pilate for permission to take Jesus' body and bury it properly.

Permission was granted and the body was taken down. Joseph, helped by Nicodemus, wrapped the body in cloth with the addition of myrrh and aloes.

They buried Jesus in an unused tomb that Joseph may have intended for himself, where it was protected by a heavy stone rolled against the opening.

What the Bible says about Joseph of Arimathea

When it was evening, there came a rich man from Arimathea, named Joseph, who was also a disciple of Jesus. He went to Pilate and asked for the body of Jesus; then Pilate ordered it to be given to him.

So Joseph took the body and wrapped it in a clean linen cloth and laid it in his own new tomb, which he had hewn in the rock. He then rolled a great stone to the door of the tomb and went away.

Who could think an Asian movie of our times, set in such a modern city as Hong Kong would recreate Jesus' coming to the world?  Who could think Josh Hartnett would be a loyal and consistent Joseph of Arimathea of the 21st century? Well, he did. And he DID it! Bravo for a visionary actor!! 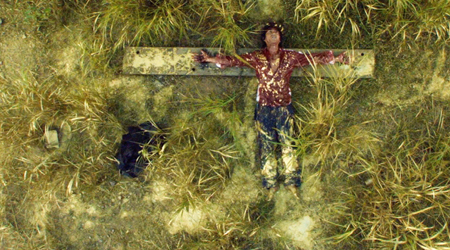 Oh my is this him reading?