First World War through the eyes of a nurse telling Americans what happened in eastern Anatolia during the Ottoman Officer film was completed. This year will be released in the starring Oscar-winning Ottoman Officer actor Ben Kingsley (Gandhi, Schindler's List), Josh Hartnett (Black Hawk Down, Pearl Harbor), Hera Hilmar (Anna Karenina, Da Vinci's Demons), Michiel Huisman (Game of Thrones) and Haluk Bilginer share. Directed by Joseph Ruben (Sleeping with the Enemy, The Forgotten), and the screenplay Jeff Stockwell (Bridge to Terabithia, The Dangerous Lives of Altar Boys) shooting in the Czech Republic are the producers, Cappadocia and was held in Istanbul.

Ottoman officer, who was disappointed because of injustices country, American doctors Jude (Hartnett) after meeting with leaving the United States to task in his Ottoman empire, which is an idealistic young woman Lillie's (Hilmar) tells the story. Lillie, Ottoman officer in an environment where all the world's dragged into war with Ismail (Huisman) falls in love. With the worsening of conditions with no more war Lillie, it is for him, or did you have to decide to live for others. 1915 Van Stephen Brown from the makers of the Ottoman Officer movie (The Devil's Advocate, Seven) "So far, nobody's Eastern Anatolia, taking issue during the First World War it take, of what happened and Turkey respects the common suffering of both Armenians and to provide an unbiased manner to the audience We wanted, "he said. A co-production of Film Production and Es Ottoman Officer of the North American premiere will be held in Los Angeles.

See more of Josh Hartnett's amazing performance in this behind the scenes moment from #TheOttomanLieutenant https://t.co/4StDfiApSM https://t.co/0lyhYHGJIv

Comment by paula on July 14, 2017 at 1:48pm
Josh Hartnett plays Jude - A doctor driven by cause and fueled by love 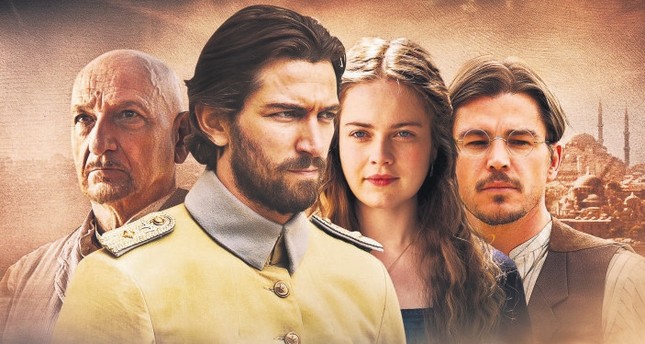 Poster and trailer for the first Turkey-U.S. coproduction in Hollywood "The Ottoman Lieutenant," have been released.

Scheduled for a May 19 premier, the movie is highly anticipated in the U.S. and Turkey, with a cast of Michiel Huisman, Hera Hilmar, Josh Hartnett, Oscar-winner Sir Ben Kingsley and Turkish stars Haluk Bilginer and Selçuk Yöntem.

Co-produced by "Y Production," one of the leading names in international cinema and the Eastern Sunrise Film, the movie, with its "in the midst of love and war" slogan, tells the story of Lillie (Hera Hilmar) who becomes a nurse to honor her brother's memory and Jude (Josh Hartnett). The duo meets and then travels to Istanbul and later to Eastern Anatoliam, in a 60-day journey at the beginning of World War I in 1914. Melih Pasha (Selçuk Yöntem) sends Lillie to Easter with a Turkish soldier, İsmail (Michiel Huisman). However, the head physician at the hospital she is stationed at, Woodruff (Sir Ben Kingsley) rejects her, saying the hospital was not suitable for a woman, and advices her to return.

Meanwhile, Commander Halil Bey (Haluk Bilginer) has other reasons to reject her. The young woman, however, refuses and is torn in between two loves, under the shadow of an ongoing war. Everyone's lives turn upside down with the Russian invasion and uprisings of Armenian gangs. The film was shot at different locations in Istanbul, Cappadocia, Aksaray, Kayseri, Van, Niğde and Prague and will be out on May 19 in Turkey.

The Ottoman Lieutenant’ Teaser: Love Is a Battlefield for Michiel Huisman and Hera Hilmar (Exclusive)