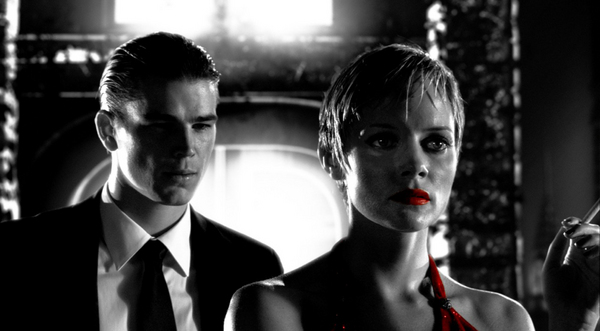 Sin City 3 PLOT : "On a dark night in Sin City, an ex-Navy SEAL named Wallace saved a young woman, Esther, from killing herself. After a night on the town, she was kidnapped by mysterious people. May God have mercy on those who stand in Wallace's way..."

WHY Sin City 3 BEFORE Sin City 2 : "The reason why Sin City 3 is set to come out before Sin City 2 is because... it isn't!!! Here is why it says it is: it was confirmed a while back that they would make two more Sin City movies. So IMDb made a Sin City 2 page and a Sin City 3 page. It was never really confirmed what books would be included in the next movie. It was highly speculated (and originally planned) that A Dame to Kill For would be the main novel for the second movie. But, due to the fact that the producers/directors waited so long for Angelina Jolie, this threw everyone else's schedule out of whack. So now, here we are, and nobody is cast for Ava Lord. And Johnny Depp finally has a free schedule to film this movie. So, instead of making A Dame to Kill For the second Sin City, as speculated/planned, they are going to go ahead with Hell and Back. This makes perfect sense. Make the movie while they can. So Sin City 3 is atually Sin City 2. (assuming they do make it and release it next) . There is no real chronology to the sequels!!!! Yes, A Dame to Kill For takes place BEFORE both The Big Fat Kill and The Hard Goodbye (Sin City 1). So it really makes no difference that Sin City 3 comes out before Sin City 2 does (A Dame to Kill For)."

Sin City 2 CASTING ? : These are the characters which appear in the novel on which Sin City 3 is based : Wallace, Esther, Delia, Maxine, Mariah, The Colonel, Liebowitz. Among those, Liebowitz was in Sin City played by Jude Ciccolella ... and ... The Colonel is actually the same character as the one played by Josh in the first movie.

Right now the movie is in production. Therefore we will have to wait and keep an eye on it. But if Josh's character appears to be in Sin City 3 script, it would be so vil from director Robert Rodriguez not to offer the part to Josh. As you may all remember, in January 2003, Josh was approached by Rodriguez, who was intent on showing Sin City creator Frank Miller that Hollywood could film his material without sacrificing its quality. After lending his time for nothing more than a test, Josh's scene got the film made and eventually was reused as the opening take of the 2005 film.

Comment by Olivier on September 22, 2009 at 1:07pm
I guessed things will be moving on with Sin City 3 when the production casts the lead role. Johnny Depp was rumored but he denied and anyway he is announced on every projects...