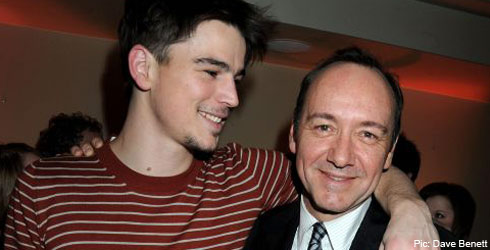 Kevin Spacey will tweet secrets from behind the scenes at the Old Vic's 24-hour play marathon this weekend.

The theatre's artistic director wants to open the creative process to all Londoners by sending updates via Twitter as a young cast and crew try to write, rehearse and perform seven new plays in a day.

It is the first time a London show has given a running commentary on its development in this way.

The inspiration was Broadway musical Next to Normal which tweeted its story from the perspective of its characters and built a fanbase of almost 450,000.

Spacey has 800,000 Twitter followers on his own account. He will be joined on the Old Vic's feed by more than 50 aspiring professionals in The 24 Hour Plays: Old Vic New Voices initiative.

From 10.30pm tomorrow, the entire team will offer insights every 10 minutes into the development of their works towards the one-off performance at 7.30pm on Sunday.

If any Twitter user responds with something the writers especially like, their thoughts could end up on stage.

The 24-Hour Plays began in 2004 and have starred such actors as American Josh Hartnett.

Comment by Camino on July 26, 2009 at 1:55am
Josh, participated in this last year November 30, 2008, when he was in London, playing in Rain Man.
As far as I know, he is not there this year?, I couldn't find this years actor list....
Too bad I missed both of those!!!
Here is the twitter link for anyone wishing, to follow this article 24HourPlay
Also Kevin Spacey's twitter address