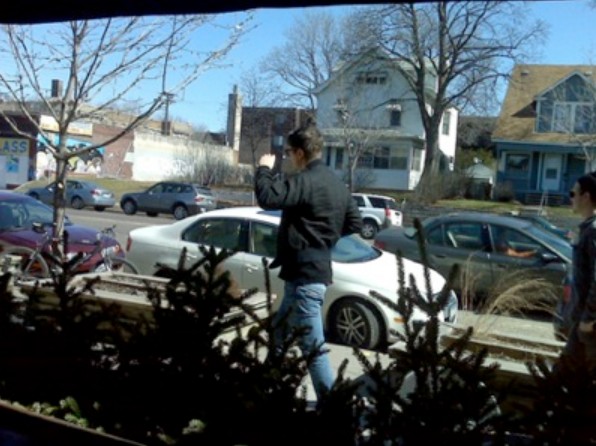 I do not run a celebrity blog. There’s no late-breaking Brangelina gossip here. However, I get a little excited about the occasional run in with a movie star—notable people do fascinate me. Just a couple weeks
ago I was eating lunch with my roommate at a bakery near our house when
we spied Josh Hartnett at a nearby table. It was pretty cool to see the
leading man from Pearl Harbor just a few chairs away, but we
refrained from being those obnoxious, overbearing girls. We maintained
composure and kept it classy. And on his way out of the bakery, Mr.
Hartnett was accosted by a girl who practically threw herself at him. My
roomie and I were glad we took the road less traveled.

But we did snap a picture of him walking out to his car (no one noticed, thanks to camera phone technology). I know, posting this picture basically puts me on the same level as the scumbag paparazzi.
But this picture was essentially for proof. You know, so that people
would believe us when we told them we had lunch sitting near Josh
Hartnett.

And then I found out that he actually lives in my neighborhood—which is a somewhat small area. He could be my neighbor. He could be right next door. Or a few houses down. Maybe his backyard actually backs up to
mine. Maybe, he’s sitting at home thinking, “Wow, I can’t believe I saw
the girl from that awesome blog called Pretty and Poor in a bakery.
Maybe she lives in my neighborhood. Maybe her backyard backs right up to
mine.”

I mean, there’s always the possibility that next week one of my posts could read, “So, today I was at the dog park and this guy came up to me and started talking. I said, ‘So what do you do for a living?’ and
he replied, ‘Ever seen Pearl Harbor?’”

Comment by Emily on April 7, 2010 at 5:52pm
You may keep the story up! Just make sure to check in the future :)
Thanks for your kudos about my blog and writing skills! Make sure to keep reading in the future!

Comment by Camino on April 7, 2010 at 3:38pm
Emily, my sincere apologies for not more clearly giving credit to your website. In your article, it does link to you & your website. I also apologize for not contacting you for permission to post this.
You have wonderful writing skills, & I for one really enjoyed reading this. Not to mention we love all the photos of Josh that we can find!
Thank you for sharing your experience, you are now envied by many woman.
May I have your permission to keep your article & photo here?

Comment by Emily on April 7, 2010 at 11:42am
Can you please do a better job attributing where you found this article? It was originally written by me and featured on my website, www.prettyandpoor.com and while I appreciate that you like it I'd really prefer that you clearly state where you found this and give me ample credit for the photo and original authorship.

I really appreciate that you posted it and your site members enjoy it! Very cool-- but please remember to attribute-- and when in doubt, it never hurts to shoot an email over asking if you can use something.

You can read this original posting, plus more fabulous, frivolous fun, on Pretty & Poor, www.prettyandpoor.com