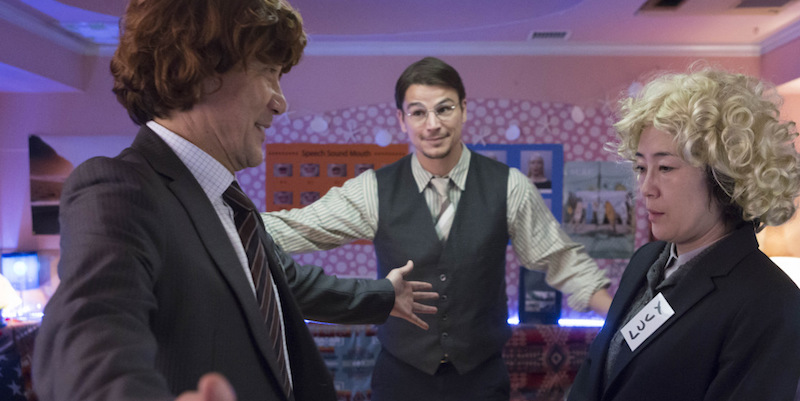 Oh, Lucy!, directed by Atsuko Hirayanagi, had its UK Premiere at the 25th Raindance Film Festival, following its World Premiere in the Critics’ Week sidebar at Cannes Film Festival 2017. It stars Shinobu Terajima and Josh Hartnett, and is Atsuko Hirayanagi’s debut feature film, based on her 2014 short film of the same name.

Meet Setsuko: a quiet, depressed, socially isolated office worker, a tiny cog in the merciless machine that is Japan’s working culture. Her life seems to be on rails: endless cycles of work, smoking, sleeping, with the end result being utter rejection from society with retirement, or suicide, or both. Into her scripted life pops her young, energetic niece Mika, who persuades her to join an unusual English class led by John (Josh Hartnett). John’s strange and enticing teaching methods, which involve deeply immersive (and very funny) roleplay, soon take their toll on Setsuko. The lines between Setsuko and her American character developed for the English class, Lucy, begin to blur, and Setsuko begins to have feelings for John. When John disappears with Mika, Setsuko (or is it Lucy?) springs into action with her sister and heads to the States on a journey of discovery – both of what’s happened to Mika, and of herself.

We are very excited to see Shinobu Terajima’s nomination in the Best Female Lead category for her role as the titular character of Lucy/Setsuko. Prior to her role in Oh, Lucy! Terajima won awards for best actress at the Blue Ribbon Awards, the Hochi Film Awards, the Yokohama Film Festival, the Berlin Film Festival, and the Mainichi Film Awards for her roles in various Japanese films.

Watch director Atsuko Hirayanagi and leading actor Josh Hartnett discuss the process of bringing Oh Lucy! to the screen at the press conference ahead of the Raindance Film Festival 2017 Opening Night Gala.