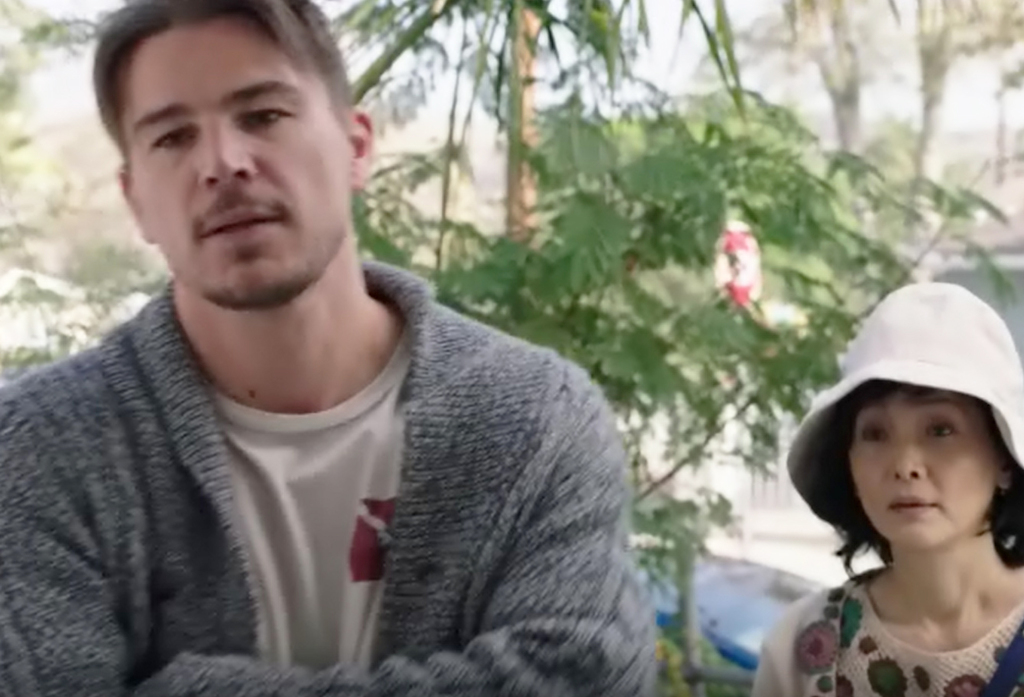 But Atsuko Hirayanagi’s film isn’t every comedy. Sometimes it’s not a comedy at all — it’s also a drama, a road-trip movie and a tragedy. But there is a deadpan absurdist strain that runs through the entire film (along with the nagging note of that opening suicide), one perfectly embodied by Shinobu Terajima as the title character.

The question of identity is, in fact, important throughout. Hirayanagi, expanding her 2014 short film, shifts tones and moods while Terajima shifts personalities. It’s weird, sometimes challenging and surprisingly engaging, thanks in large part to Terajima, who is outstanding.

The movie begins with Setsuko — played by Terajima, but hang on — standing on a crowded Tokyo train platform. She’s wearing a surgical mask, like many other passengers. As the train arrives, a man slides past her, whispers, “Goodbye” and leaps to his death.

Setsuko heads off to work anyway, a drone-like office job, seemingly no worse for wear. She smokes constantly, despite a cough. She exudes unhappiness, an unfulfilled person just going through the motions.

Her niece Mika (Shioli Kutsuna) invites her to the restaurant where she works, then tells Setsuko she paid 600,000 yen for an English class — non-refundable — and wants her aunt to both take her place and give her the money for it. Setsuko is understandably reluctant, but there’s a free session, so she decides to check it out.

It looks like a fly-by-night operation, and the teacher, John (Josh Hartnett), an American, employs rather unorthodox methods involving hugs, wigs and role-playing. (American English is lazy, he says, so relax.)

He also gives his students — other than Setsuko, a man named Takeshi (Koji Yakusho) seems to be the only one — English names. Thus, peering out from under a hideous blond wig, Setsuko becomes Lucy. (Takeshi becomes Tom.)

Whether it’s the hugs from John, with whom she clearly has instant feelings, the new identity or the awful wig, the class awakens something in Lucy. She can still be unpleasant, though her scathing public takedown of a retiring co-worker may be a reaction against thinking she’s seen her own future. But she’s also finally alive.

And then John quits — running off to Los Angeles with Mika, with whom he’d been having a secret relationship. Lucy is crushed.

So she goes after them.

Unfortunately for her, so does Ayako (Kaho Minami), Lucy’s stunningly unpleasant sister and Mika’s mother. They find John easily enough, living in a dump he can’t pay the rent on, but Mika has left him and moved to San Diego. Thus begins an unlikely road trip for Lucy, John and Ayako.

Like the story, the emotional tone of the journey is all over the map. These are damaged people, all of them, not so much seeking to be made whole as to just go on to the next thing. If that doesn’t sound especially funny, you’re not putting enough faith in Hirayanagi or Terajima. It’s not a laugh riot, mind you, but there is dark humor in a lot of the absurd situations the characters find themselves in. Terajima plays it all straight, as befits Lucy, who is just beginning to learn how to feel things.

Of course, that means feeling the good and the bad. Armed with her new identity, but with problems of her own making still to be solved, Lucy seems certain to have plenty of both elements in her life.