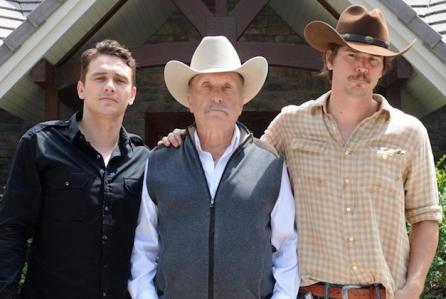 EXCLUSIVE: Being at the center of a distribution legal battle was probably not the launch the Oscar winner wanted for his latest directorial feature effort before its world premiere next week at this year’s SXSW. But with a Breach of Contract complaint filed today in L.A. Superior Court, that is what Robert Duvall and Wild Horses are getting.

In their 5-claim filing, distributors Phase 4 Films claim that Wild Horses producer Michael Mendelsohn’s State of the Union Distribution and Collections last month reneged on a deal for the Toronto-based company to handle domestic duties for the Duvall pic. State of the Union informed Phase 4 in late February that the rights to the picture have gone to Millennium Entertainment AKA Alchemy, who are also named as a defendant. “Phase 4 brings this action to enforce its exclusive domestic distribution rights in Wild Horses and to avoid the irreparable harm that it will suffer if Licensor is permitted to sell those rights out from under Phase 4,” says the 9-page complaint (read it here).

In addition to a variety of damages, the jury trial seeking complaint from Phase 4 is asking for “a preliminary and permanent injunction prohibiting Licensor for transferring to Alchemy or any other distributor all or a portion of the domestic distribution rights that Licensor conveyed to Phase 4 under the License Agreement.”

While The Judge actor himself is not named as a defendant, his work is obviously mentioned a number of times in the filing as is ICM Partners agent Peter Trinh. The latter allegedly negotiated the agreement last fall and earlier this year for Mendelsohn that Phase 4 would purchase, as emails accompanying the filing detail, domestic distribution to the Duvall directed, written and starring family drama. Premiering at SXSW on March 17, Wild Horses also stars James Franco and Penny Dreadful’s Josh Hartnett among others. The deal that Phase 4 believed it had with financier Mendelsohn included “theatrical, VOD, digital, home video, and television distribution” in the USA and Canada.

Phase 4 thought they had a deal “closed,” to quote an email from ICM’s Trinh, on January 20 and started handing out dough to promote the film. At Sundance this year, Mendelsohn and Phase 4’s president Berry Meyerowitz met and discussed the film and doing future business together, the complaint says. “All in all Phase 4 acted and were treated like they were the distributor of the film. In that first month alone, Phase 4 devoted hundreds of hours, and invested tens of thousands of dollars,” they say of their efforts in February of this year.

Now that is all a waste because State of the Union is insisting there was no done deal but only “preliminary negotiations” with Phase 4 since last October. “Over Phase 4’s objection, and in deliberate disregard of that License Agreement and the rights granted to Phase 4 thereunder, Licensor has continued to negotiate with Alchemy to sell distribution rights in the film out from under Phase 4,” says today’s filing.

I hope to see the movies!!!