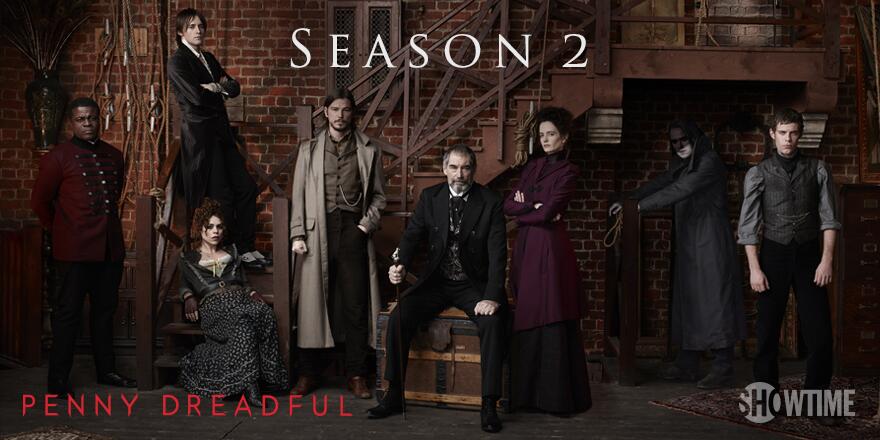 [PRESS RELEASE] NEW YORK, NY – (June 4, 2014) – SHOWTIME has picked up a second season of its critically acclaimed drama series PENNY DREADFUL, it was announced today by David Nevins, President, Showtime Networks Inc. The network has given an expanded order of ten episodes to the series. Created, written and executive produced by three-time Oscar® nominee John Logan, PENNY DREADFUL has been embraced by the network’s subscribers, drawing 4.8 million weekly viewers across platforms since its launch. The series, which debuted to rave reviews, has claimed the spot as the network’s No. 1 watched new show ever on SHOWTIME ON DEMAND® and SHOWTIME ANYTIME® with over 3.6 million viewers on those platforms through the third week of the season. Starring Josh Hartnett, Timothy Dalton and Eva Green, PENNY DREADFUL will go into production, and will once again shoot on location in Dublin, Ireland for a 2015 launch.

It's been a case of lights, camera, action in Dublin's city centre this week as filming continues on two major television productions.

Pedestrians in Francis Street in the south inner city were transported back to 19th Century London yesterday when the Iveagh Market was re-imagined as the period setting for Sky Atlantic drama Penny Dreadful.

Filming for the second season of the show, which has starred Timothy Dalton, Josh Hartnett and Billie Piper, has been under way in the city over the past few months.

Only a few minutes down the road in St Teresa's Gardens, filming is continuing on new TV3 soap Red Rock.

Some key cast members were on set including Andrea Irvine who plays Gda Angela Tyrell and Jane McGrath in character as Sharon Cleere.

A TV3 spokesperson said the scene involved "some special effects", though she was keeping the details under wraps. She said there has been some "really fantastic excitement" surrounding the filming of the show from locals who "could not have been more helpful" while the crews were on location.

"Having had a look at some of the rushes for Red Rock I think people are going to be hooked from the start," she added.

"There's a real sense that we are creating history in TV3.

"This is not only our biggest commission ever but it's Ireland's first new soap in over 20 years. It's going to be amazing."

Red Rock is a fictional harbour town, so the majority of shooting happens around Howth and Dun Laoghaire. However, a number of other Dublin locations have been used in the production.

TV3 recently lost the rights to Coronation Street and Emmerdale to UTV Ireland, but the show's producers won't be using their rivals' ratings as a yardstick for success.

"It's like comparing apples with oranges," said the spokesperson.

"Red Rock is a modern soap that will connect with Irish viewers. It has more of a dramatic feel to it, catering for what is an insatiable appetite for good Irish drama."

Steady yourselves, Josh Hartnett's back in Dublin this Friday

While we all know us Irish like to play it cool around the Hollywood A-Listers, it's still nice to know when they are stopping by. And Josh Hartnett is doing much more than stopping by, he will be pretty much taking up residence here over the coming months as filming of Sky Atlantic's Penny Dreadful begins.

The star spent a great deal of time here last year too, when the first series of this eery Victorian drama was filmed. We even got to talk to him about his time here a while back, when he told entertainment.ie about all his favourite Dublin hotspots to hit up of an evening.

He's not the only bigwig to be wandering the streets of our capital too, as Timothy Dalton and Eva Green also star in the drama, which is all filmed in locations around Dublin and beyond. In fact, the whole first season of the show brought a whopping €33 million to the Irish economy in terms of spend on local jobs and services. Eh, who needs Garth Brooks when we've got Penny Dreadful? And we're pretty sure Josh Hartnett would rock a stetson.

Joining the cast this year is also Cork's own Sarah Greene, who you may have seen on The Late Late Show last Friday alongside Deirdre O'Kane promoting their film 'Noble'. She will play Hecate in the series, the powerful daughter of Evelyn Poole played by the returning award-winning Helen McCrory (Harry Potter and the Deathly Hallows).

In case you missed the first series of this terrifying psychological thriller, it is written and executive produced by three-time Oscar nominee John Logan (Hugo, The Aviator, Gladiator) and executive produced by Oscar winner Sam Mendes (American Beauty, Skyfall). It features some of literature's most iconic characters from Frankenstein to Dorian Gray, who all seem to be trapped in some kind of 'half world'.

Production will begin this Friday, so if you see any Victorian or Gothic looking sets around Dublin, you'll know what it's about. Better yet, if you see any of the stars themselves, do let us know. Not that we'll be wrecking their heads or anything, but you know, Irish hospitality is very important to us.

Let's just hope there are no awkward selfies with Josh on The Late Late Show this time round, we're better than that people.
http://entertainment.ie/tv/news/Steady-yourselves-Josh-Hartnetts-ba...

The stage legend will guest star on the second season as a mysterious character of great importance to Eva Green’s bewitched character Vanessa.

She joins fellow new cast members Douglas Hodge, Sarah Greene and Jonny Beauchamp. Hodge will play an intense Scotland Yard investigator named Bartholomew Rusk who is on the hunt to discover who is responsible for the terrible murders that have been plaguing London. Greene will play Hecate, the powerful daughter of Helen McCrory’s Evelyn Poole, and Beauchamp has the vague and mysterious character description of a “young man with a singular past.”

Showtime has also confirmed that McCrory and Simon Russell Beale have been upped to series regulars for the sophomore season.

Production on the upcoming 10 episodes — all written by John Logan — will begin in September in Dublin, Ireland for a 2015 debut on the network.