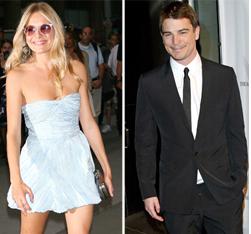 
"She arrived with two men and sat at a table right in front of the stage. In the middle of rocking out to the music that was playing, she eyed Josh and instantly leapt out of her seat to shower him with a public display of affection," Contactmusic quoted a source as having told Fox News.

The 31-year-old actor was apparently quite flattered with the attention, and quickly returned the G.I. Joe star's advances. But the open flirting did not quite impress Sienna's pals, who failed in persuading her to leave and eventually left her to her own.

Goth rockers The Cult gave a special performance at the party, which was attended by the likes of Hugh Grant, socialite Nicky Hilton and supermodels Helena Christensen, Alek Wek, and Bar Refaeli


soooooo ARE SIENNA AND JOSH GETTING CLOSE?

Comment by nada on September 16, 2009 at 1:34pm
ya sure i think that they r just friends but i wanna say something from my heart i hate bar refaeli like dead

Comment by Paige on September 16, 2009 at 9:53am
The media love making mountains out of mole hills.

Comment by Camino on September 16, 2009 at 9:40am
I believe they are just friends as well...and they are both dating other people!

Comment by Annie on September 16, 2009 at 6:39am
I'd like to believe that they were just friends catching up! They had been friends prior, and he was friends with Jude Law!