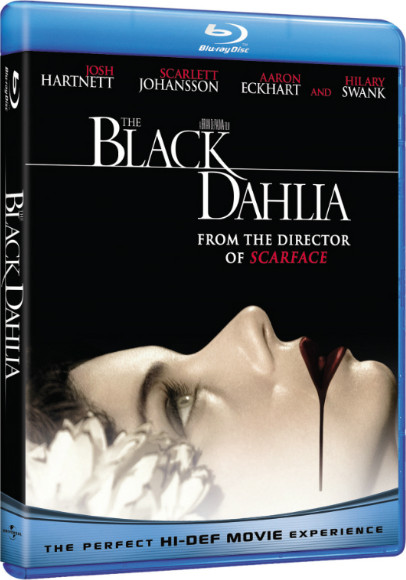 The Black Dahlia will make its Blu-ray Disc debut on September 7, 2010. The film will be offered in 1080p video and 5.1 DTS-HD Master Audio. There is no definitive word on pricing or bonus features details from Universal at this time, though a safe bet is to expect the selection DVD to be ported onto this new high definition release.

The Black Dahlia weaves a fictionalized tale of obsession, love, corruption, greed and depravity around the true story of the brutal murder of a fledgling Hollywood starlet that shocked and fascinated the nation in 1947 and remains unsolved today. Two ex-pugilist cops, Bucky Bleichert (Josh Hartnett) and Lee Blanchard, are called to investigate the homicide of ambitious silver-screen B-lister Betty Ann Short a.k.a. The Black Dahlia -an attack so grisly that images of the killing were kept from the public. While Blanchard's growing preoccupation with the sensational murder threatens his marriage to Kay, his partner Bleichert finds himself attracted to the enigmatic Madeleine Linscott, the daughter of one of the city's most prominent families-who just happens to have an unsavory connection to the murder victim.