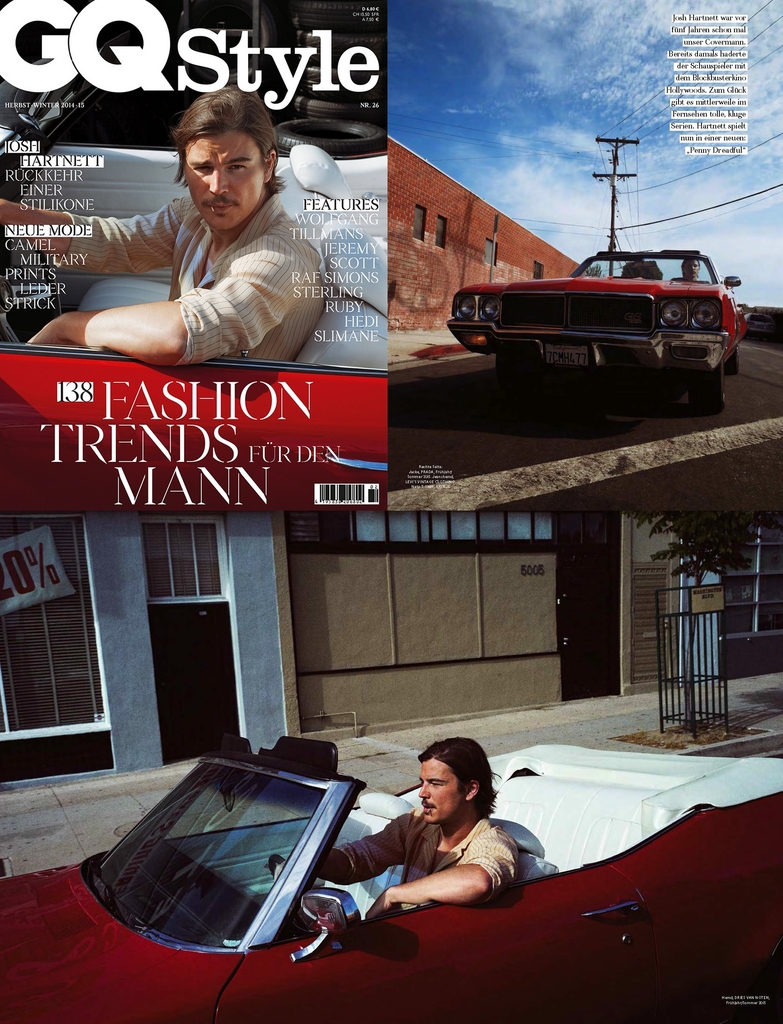 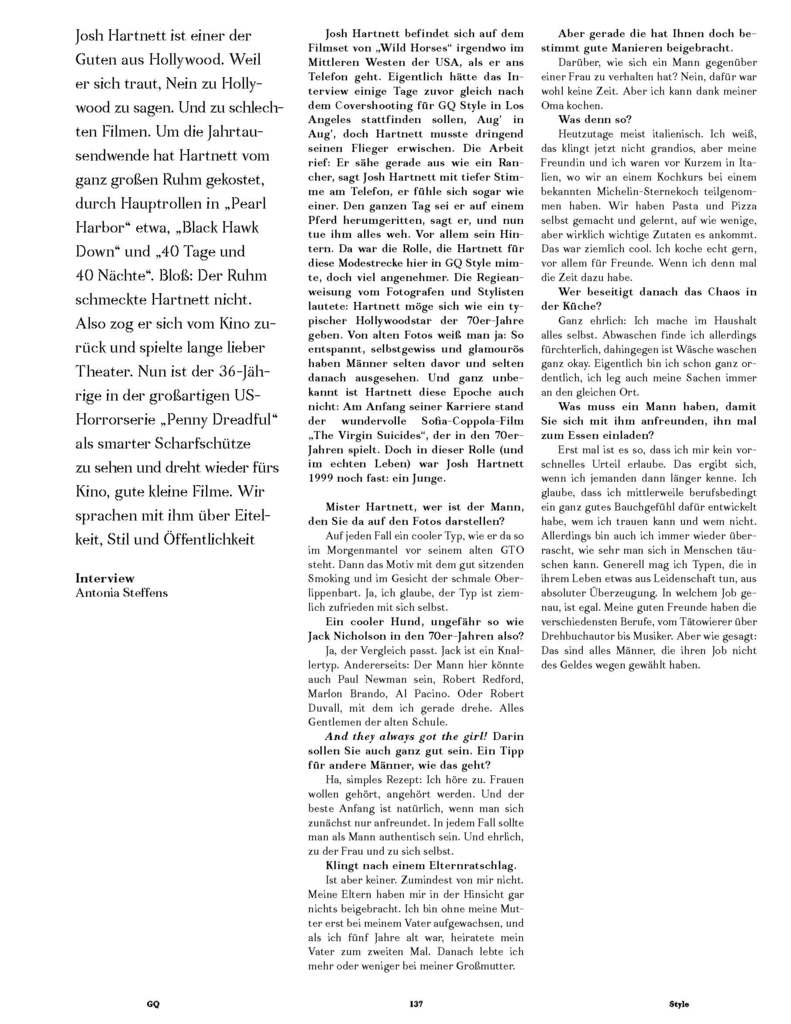 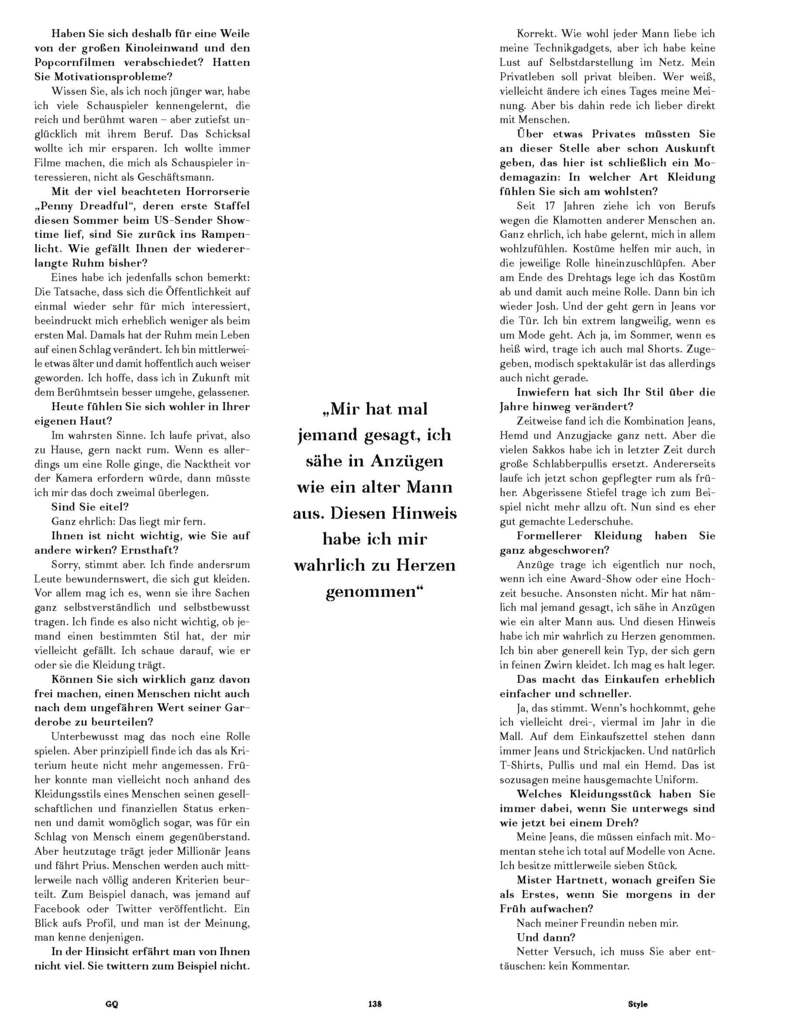 Rough translation from German to English...

Josh Hartnett is one of the good from Hollywood. Because he had the courage to say no to Hollywood. And to bad movies. At the turn of the millennium by very great fame has Hartnett cost, by starring roles in "Pearl Harbor", for example, "Black Hawk Down" and "40 days and 40 nights". Just: the glory not tasted Hartnett. So he withdrew from the cinema back and played long prefer Theater. The 36-year old is now in the großarti gen USHorrorserie "penny dreadful" as a smart Sniper and turns back to see, good small films for the cinema. We spoke to him about vanity, style and the public.

Josh Hartnett is located on the film set of "Wild Horses" somewhere in the Midwest of the United States, when he go to the telephone. In fact, the interview a few days earlier just after the Covershooting for GQ style in Los Angeles, Aug' in Aug', but Hartnett had to urgently its flight. The work called: he would just like a rancher, says Josh Hartnett with a deep voice on the phone, he felt even like one. The whole day he was on a horse
riding, he says, and now do to him everything hurts. Above all, his back. As was the role that Hartnett here for this fashion spread in GQ style role, but much more pleasant. The stage directions from the photographer and stylist was: Hartnett may like a typical Hollywood star of the 70s. You know old photos: so relaxed, selbstgewiss and glamourous men have rarely looked like before and rarely thereafter. And Hartnett this epoch is also completely unknown not: at the beginning of his career was the wonderful Sofia-Coppola -film "The Virgin Suicides", in the 70s. But in this role (and in real life) was still almost 1999 Josh Hartnett: a boy. Mister Hartnett, who is the man that you as in the photos? In any case, a cool guy, as it so in my dressing gown before his old GTO. Then the subject with the good sitting smoking and in the face of narrow Oberlippenbart.
Yes, I believe that the type is quite satisfied with himself. a cool dog, much like
Jack Nicholson in the 70s years ago? Yes, the comparison fits. Jack is a Knallertyp.
On the other, the man here could also be Paul Newman, Robert Redford, Marlon Brando, Al Pacino. Or Robert Duvall, with whom I just twist. All Gentlemen of the old school.
And they always got the girl! It should also be very good. A tip for other men, and how does it work? Ha, simple recipe: I listen. Women want to be heard. At the beginning and the best is, of course, if you are initially only befriends. In any case, one should be authentic as a man. And, to be honest, to the woman and to itself. Sounds like Elternratschlag.
But it isn't. At least not from me. My parents have taught me nothing at all in this respect. I am without my mother only on my father grew up, and when I was only five years old, married my father for the second time. I lived more or less at my grandmother.

But it is precisely in the good manners has surely taught them.
Furthermore, as a man to a woman has to behave? No, that was not time. Thanks to my
grandma but I can cook. So what is it?Today mostly Italian. I know,this is going to sound not stellar, but my friend din and I recently stayed in Italy, where we participated in a cooking class at a well-known MichelinSternekoch. We have pasta and pizza and learned to like a few, but really important ingredients is important. That was pretty cool. I really like to cook, especially for friends. If I had the time to do this. Who then eliminated the


chaos in the kitchen? To be honest, I do think i wash everything themselves. In the budget, however terrible, however washing is okay. Actually, I'm quite tidy,

I put my stuff in the same place. What does a man have to make friends with him, invite him to eat? Only time it is like that I would not prejudge. This is the result, if I know someone then longer. I believe that I have a very good gut feeling for it professionals
have developed, whom I can trust and who is not. However, I am always surprised at how
much one can change in people. In general I like types in your life do something from passion, from absolute conviction. In what job exactly, doesn't matter. My good friends have a tattoo parlor on the various professions, from screenwriter to musicians. But as I have said, These are all men, with their job Have you therefore for a while of the big cinema screen and the Popcornfilmen adopted? Motivation), but they had you?
You know, when I was younger, I have met many actors, the rich and famous - but deeply unhappy with their profession. The fate I wanted to save me. I always wanted to
make films, the interested in me as an actor, not a businessman. With the highly acclaimed installment "penny dreadful", with its first season this summer in the US-Sender Showtime ran, you are back in the limelight. Do you like the new-found fame so far? One thing I have noticed in any case: the fact that the general public will be
interested in for me once again very impressive prints, significantly less than the ers me ten times. At that time the fame changed my life in one fell swoop. I am now
a bit older and hopefully wiser. I hope that I get better in the future with the Beruhmtsein, more relaxed. Today you will feel more comfortable in your own skin? In every sense of the word. I course private, at home, like rum. However, if there would be a role that
would require nudity in front of the camera, but then I had to get the think twice.
Are you vain? To be honest, I am far from the lies. You is not important, how you appear to others? Seriously? Sorry, but agrees with. I think queer people admirable, the dress is good.Above all I like it, if you take your stuff quite naturally and self-confident. I think it is not important whether someone has a particular style, perhaps like me. I look at how he
or the clothing. You can really make of it freely, a people not even after the
approximate value of his wardrobe to assess? The subconsciously may still play a role.
But in principle I find that as a criterion is no longer adequate. Could perhaps be based on the earlier styles will find their look for a people recognize his social and financial status
and thus possibly even, what a blow from a man has faced. But today, every millionaire jeans and driving Prius. People are also now to totally different criteria. For example, what someone on Facebook or Twitter. A view of the profile, and it is believed, you know those. You can learn from them in this respect not much. For example, do not use Twitter you.

"I said, I would like someone in suits as an old man. This note I truly took to heart
Correct. I love my husband as I believe everyone Technikgadgets, but I have no desire for self-expression in the network. My private life should remain private. Who knows, maybe other one day I my opinion. But in the meantime I would rather speak directly
with people. You had to use a private information already at this point, however, this is, finally, a fashion magazine: In what kind clothes you feel most comfortable?
Since 17 years I prefer the clothes other people because of my profession.
To be honest, I have learned in all feel comfortable. Costumes also help me, help in the respective role. But at the end of the day I put the costume from and hence my role. I am
Josh. And will be happy to discuss in jeans before the door. I am extremely boring, where fashion is concerned. Oh yes, in the summer, when it is hot, I wear shorts time. Admittedly, however, this is also not fashionable just spectacular. How has your style
changed over the years? Sometimes I found the combination Jeans, t-shirt (jacket and very nice. But the many jackets I have recently been replaced by large Schlabberpullis. On the other course I now have a neat rum than in the past. For example, I do not wear torn boots more often. Now, it is rather well-made leather shoes. More formal clothing you have sworn off? I wear suits only, if I or a wedding a AwardShow visits. Otherwise it is not. I was told someone would be in suits, I like an old man. And this note I have taken to heart, true. But I am generally not a type that would like to be fine thread. I like it casual. This makes the shopping a subjects and significantly faster. Yes, that's true. If it's feeling later, I go maybe three, four times a year in the Mall. On the shopping list are then
always jeans and cardigans. And of course they have arrived, sweaters and a shirt. This is, so to speak, my home-made uniform. What garment you always have, if you're on the go as they are now a shoot? My jeans, must be simple. Currently I am all for models of acne.I now seven pieces. Mister Hartnett that access as the first, in the morning if you
wake up early? After my girlfriend next to me. And then what?Nice try, but I must disappoint you: no comment.

Josh Hartnett is one of the good from Hollywood. Because he had the courage to say no to Hollywood. And to bad movies. At the turn of the millennium by very great fame has Hartnett cost, by starring roles in "Pearl Harbor", for example, "Black Hawk Down" and "40 days and 40 nights". Just: the glory not tasted Hartnett. So he withdrew from the cinema back and played long prefer Theater. The 36-year old is now in the großarti gen USHorrorserie "penny dreadful" as a smart Sniper and turns back to see, good small films for the cinema. We spoke to him about vanity, style and the public.