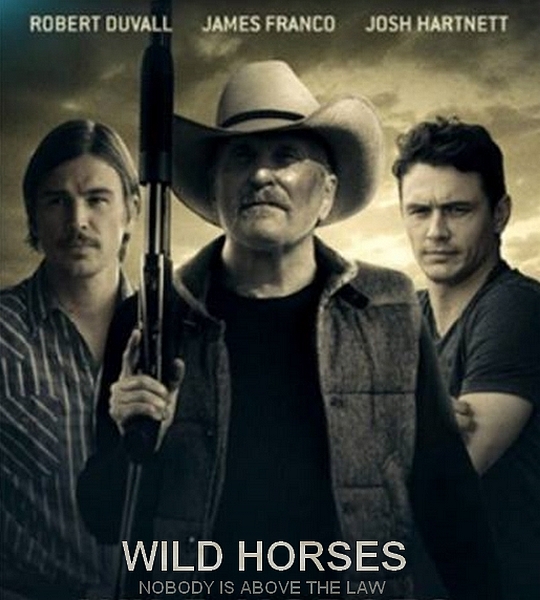 For the most part, “Wild Horses” weaves every element within the context of a traditional Western while exploring the inner dynamics of a family rife with turmoil.

The story opens 15 years in the past when Duvall discovers his son, played by James Franco, is gay. Duvall, the conservative patriarch of the family, responds like the conservative Texan that he is—not too kindly. The concept of homosexuality exceeds the limits of his imagination.

The fallout, and the real basis of the plot, occurs when Franco’s love interest is reported missing.

The film then jumps to the present when the case was is reopened until 15 years later after a Texas Ranger, played by Luciana Pedraza, uncovers new evidence that makes Duvall the lead suspect.

That’s when things got a bit haywire. Duvall was hiding something and Pedraza—stoic, firm and tough—was on to him.

Pedraza’s investigation causes Duvall to reconsider his actions 15 years ago and his place within the family.

The strength of “Wild Horses” is in its ability to balance common movie tropes.

No character is only good or bad. There is no black or white in this universe—just gray.

Duvall is a kindhearted father who wants to provide for his family, but he is also blinded with prejudice. Pedraza is a fearless detective with a steely resolve, but she lacks empathy. Franco solves his problems with his fists, but he still possesses the ability to forgive his father for shunning him for his sexuality.

The glaring weakness of “Wild Horses” is in its story, which lacks depth.

The resolution, which I will not spoil here, is unfulfilling. That being said, “Wild Horses” compensates by addressing the complexity of human nature.

Duvall struggles with his son’s homosexuality, where he is forced to look himself in the mirror and re-evaluate the fiber of his very being.

Ultimately “Wild Horses” is well worth a viewing, even if there were no actual wild horses in the film.