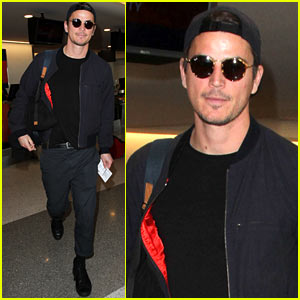 Josh Hartnett appears to be in great spirits while catching a flight out of LAX Airport last week in Los Angeles!

Over the summer, the 38-year-old actor’s Showtime series Penny Dreadful officially ended after its third season.

As Josh made his way to the security line that day, TMZ caught up with him and asked if he would like to see the show return for a fourth season!

“It’s out of my hands,” Josh told the reporter. “Otherwise I’d say come back! I think everybody loved making it.”

Sadly, series creator John Logan has already confirmed the the Penny Dreadful is definitely over.